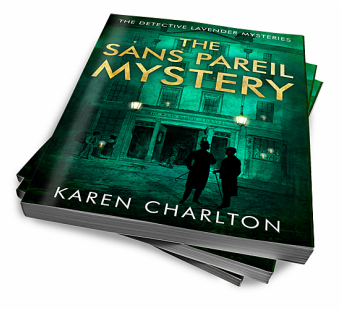 On a cold February night in Regency London, a dark curtain falls on the Sans Pareil Theatre following the death of April Clare, a promising young actress, whose body is found in mysterious circumstances.

Detective Stephen Lavender and his dependable deputy, Constable Woods, quickly discover that nothing is quite as it seems. As successive mysteries unfold, they soon realise that it is not only the actors from the Sans Pareil who are playing a part.

With the Napoleonic War looming dangerously across the Channel, this is a time of suspicion and treachery. Following the clues from the seedy back streets of Covent Garden up through the echelons of society, Lavender and Woods begin to fear that the case is much bigger than they’d dared imagine—and worse, that they are at risk of becoming mere players in a master criminal’s shadowy drama.

It will take all of Lavender’s skill and wit, and help from the beautiful Magdalena, to bring the mystery of the Sans Pareil Theatre to a dramatic conclusion in the final act.

‘Charlton handles the historical detail with a finely trimmed quill, never burdening us with too much extraneous detail, yet we’re pulled along slap-bang into the smelly, dirty, crime-ridden streets of early nineteenth-century London.’
—Sandra Mangan, crimefictionlover.com

​‘Charlton creates characters so believable it was easy to forget I was reading a work of fiction. Combined with her attention to detail and meticulous research, the Regency period is brought to life in such a way that I felt I was there with Detective Lavender and Constable Woods, solving the mystery alongside them—and what a duo they are proving to be. “Gawd’s teeth!” as Constable woods might say. This is a series I hope to enjoy for many years to come.’
​—Steve Robinson, author of the Jefferson Tayte Genealogical Mysteries