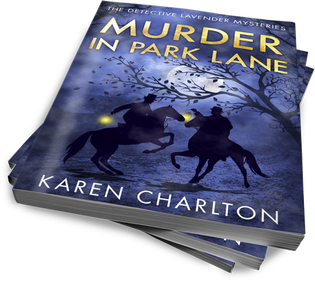 London, 1812. At a fashionable address in leafy Mayfair, a far cry from Detective Stephen Lavender’s usual haunts, a man is found dead in his room. He has been brutally stabbed, but the door is locked from the inside and the weapon is missing.
The deceased is David MacAdam, an Essex businessman with expensive tastes. As Lavender and Constable Ned Woods travel between London and Chelmsford seeking to understand MacAdam’s final hours and unearth the grisly truth, they uncover a tangled web of deceit behind his stylish facade. The unusual circumstances of MacAdam’s death are nothing compared to the shady nature of his life and it seems the house on Park Lane is at the heart of a dark conspiracy.
But when a second body turns up, everything they think they’ve learned is thrown into doubt. Can Lavender and Woods find out who’s behind these shocking murders before more lives are ruined?
Buy on Amazon.com
Buy on Amazon.co.uk

Some book titles are far too clever for their own good and can leave the reader puzzled. An oblique reference to an as-yet-uncovered crime, maybe? A play on words? Yet another variation on the ‘Lies’ or ‘Girl’ theme? No such subterfuge here, Murder in Park Lane is about a murder, in London’s swanky Park Lane no less!
The latest outing for Detective Stephen Lavender, a Principal Officer with the Bow Street Police Office, and his trusty sidekick, Constable Ned Woods, opens with a conundrum in the salubrious surroundings of Mayfair. A man has been found dead in his bedchamber and none other than renowned surgeon Sir Richard Allison has demanded Lavender’s assistance in the matter. Sir Richard has often been called upon to help the Bow Street officers in their investigations and there’s no love lost between him and Ned Woods, who calls the doctor a ‘wheedling sawbones’. Looks like the sparks are about to fly.
It’s an instantly engaging and hugely entertaining start to number five in a series that goes from strength to strength. Lavender soon cuts through Sir Richard’s bluster and realises the victim has, indeed, been murdered. But who would want to kill businessman David MacAdam, a lodger in the home of impoverished Mrs Palmer, the widow of a returned British Army Colonel?
The case is a puzzling one, and the more that Lavender discovers it seems the less he actually knows. Because MacAdam was a practised liar, and the list of his victims is long. There’s nothing that Lavender loves more than an intriguing puzzle – and this case has them in spades!
It’s autumn, 1812 as this story unfolds and Charlton evoke the period with vivid precision. Lavender and Woods work well together, combining intuition with good solid police work to uncover, bit by tantalising bit, the sorry tale of David MacAdam – a lothario, cheat and philanderer. It’s a refreshing change to leave the high-tech behind and get back to the basics of police procedure and there’s something really satisfying when the clues begin to slot into place and a clearer picture emerges.
Alongside the cleverly constructed mystery, there’s the further development of the characters of Lavender and Woods. The former is about to become a father, while the latter gets himself into all manner of trouble by following his own deluded version of Regency Weight Watchers! Both storylines add depth and humour to a book where the pages just fly by.
Unlike others in this series, Murder in Park Lane is a tale taken entirely from the author’s imagination. Life in London and Chelmsford in the early 19th century is lovingly recreated here. Our main story may be centred upon London’s posher side, but Charlton also takes the reader to the capital’s less moneyed areas, evoking the sights, sounds and even the pungent scents of a busy city. Her characterisations are imaginatively rendered, with streetwise urchin Will and snooty surgeon Sir Richard particular favourites in a delicious cast of supporting characters.
Central to it all though is Lavender and Woods, a duo that has developed into a team to rival Holmes and Watson. If you’re longing for a break from the modern day crime milieu then I recommend making a date with this series.