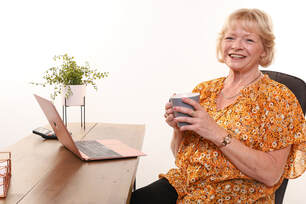 Karen Charlton
Originally from Sheffield and Leeds, Karen now lives in a sleepy fishing-village on the North Yorkshire coast.  She has two grown-up children, a gorgeous grandson and two cats.

​An English graduate and an ex-teacher, Karen was also the coordinator of Famelton Writing Services, a literary consultancy run by a group of successful, published writers.  She has led writing workshops entitled: Good Enough to Publish? and spoken at a series of literary events across the north of England.

She has had poetry and theatre reviews published by the local newspapers and has written articles for magazines about the infamous robbery at Kirkley Hall - the subject of her debut novel Catching the Eagle.

Karen enjoys reading, foreign travel, the theatre and a weekly trip to the village pub quiz. In 2014, Karen and her pub quiz team took on 'The Eggheads' in the B.B.C. quiz show of the same name - and beat them. Karen has  always enjoyed a good mystery and many years ago she wrote and produced Murder Mystery Weekends for Raven Hall Hotel which won an award from the  Yorkshire Tourist Board.
Karen was intrigued by the minor role played in Jamie Charlton's story by a real-life Bow Street officer called Stephen Lavender, who was hired as a private detective to solve the mystery of the robbery by the owner of Kirkley Hall. Further research revealed that apart from solving crimes in the capital, the Bow Street Principal Officers  were often sent out to help magistrates in the provinces with difficult cases.They were Britain's earliest private detectives and were famous throughout Britain.

In 2011, Karen wrote the first novel in The Detective Lavender Mysteries, The Heiress of Linn Hagh.  There are now six novels in the series and four short stories, published by Thomas & Mercer.