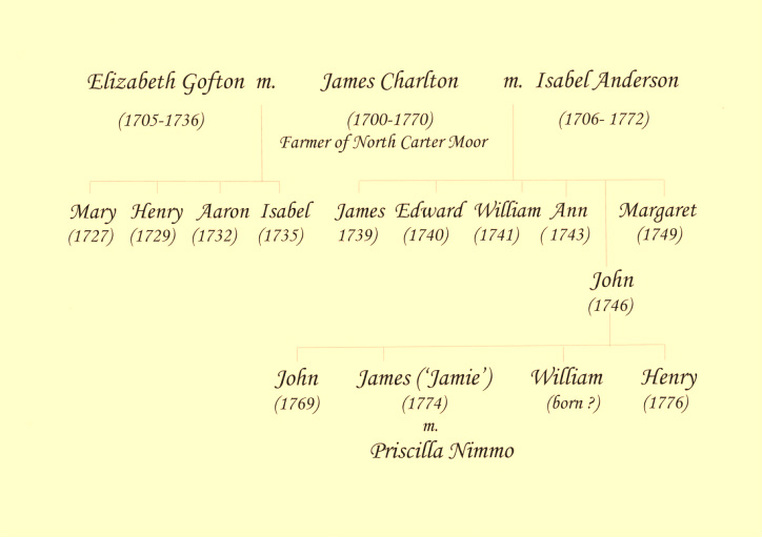 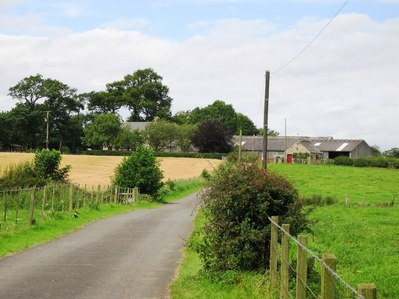 North Carter Moor Farm by Graham Scarborough
James Charlton (senior) was the grandfather of Jamie and William,  the main characters in Catching the Eagle.

Born in 1700, he married twice, farmed at North Carter Moor farm in Ponteland and died in 1770. His first wife, Elizabeth Gofton was a bit of posh totty.  She was the daughter of the wealthy Gofton family of Eland Hall.  She bore James four children.  Shortly after the birth of their fourth child, Elizabeth Gofton died and was buried in the Gofton family vault in St. Mary's Church, Ponteland Church.

On 26th November 1738, James (senior) married again to Isabel Anderson.  Isabel bore James six children.  We are descended from James' marriage to Isabel - not his gentrified first wife. Their youngest son, John (born in 1746) was our ancestor and was the father of the brothers in Catching the Eagle.

Despite his five older brothers, John (1746) eventually became the sole tenant of the farm.  This surprised us; in their world, primogeniture dominated and the younger sons usually ended up as agricultural labourers, like Jamie. 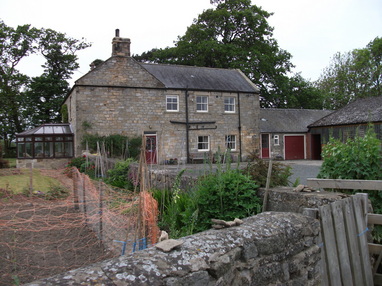 Side view of North Carter Moor Farmhouse
The family’s eldest son, Henry, had emigrated to Nova Scotia in the 1760s and spawned a huge tribe of his own who went onto to populate most of Canada. So he was well out of the picture when it became time to hand over the lease of the farm.  The two eldest daughters, Mary and Isabel, had left home to get married.  However, the rambling and isolated farmhouse must still have been seriously over crowded at times.

At the time of the death of James Charlton (senior) in 1770, there was a lot of tension at the farm.  We know this because James took the relatively unusual step of making a will just before he died.  He was clearly worried about what would happen to his farm and his family after his death - especially to his second wife, Isabel and his son, Edward (1740.) Edward appeared to be ill and in need of care. He died two years after his father and the will suggests that Edward’s siblings were far from sympathetic towards him.  In another dramatic sentence, his son James (1739) was completely disowned in the will.  We have no idea what James had done to deserve this and we can only assume it was pretty horrendous by the standards of 1770.  In addition to this, William (1741) is barely mentioned; his father leaves him a meagre half a crown compared to the ten pounds a piece that is left to Aaron and John.

In the will, James Senior leaves the lease and control of the farm to his wife, his eldest son, Aaron, and youngest son, John.  However, even that decision was conditional on their good behaviour. The will states:

'…after all are valued and everyone knows their just part, I will that the farm be carried on in the same manner by my wife and Aaron and John and all my family to continue on my farm as they are so long as they please, and James I disallow to have any right at all to the farm during my lease and for the good behaviour of Aaron or John or any one of them while they continue together I appoint my brother Henry Charlton and Robert Nicolson to look to take to authorize them to see and look that they behave themselves as they ought towards my wife and son Edward, and that they carry on their business in a right and orderly manner and in case of any misdemeanour I desire the aforesaid Henry Charlton and Robert Nicolson to rebuke and admonish and pray them to do well…if either Aaron or John behave not well towards my wife, my son Edward or any of my family then I appoint constitute authorize and allow the aforesaid Henry Charlton and Robert Nicolson to turn either Aaron or John off the farm in case of bad behaviour neglect of business or the like…' 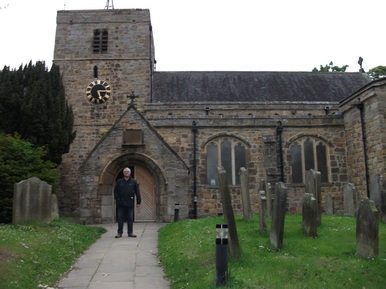 Chris standing in St.Mary's churchyard, Ponteland
James Charlton Senior died two days after making this will and was buried in Ponteland Church yard.  At the very least, his will shows that he had a controlling nature; at its worst, the will hints at a fractious and dysfunctional family life at North Carter Moor.  Two years later, both Edward and Isabel died, they were buried with James. It says on his grave stone:

The pious and humane is interesting.  Were his sons not pious and humane?  Is that why he had so little faith in them?  Whatever happened, with a bit of imagination and more research, I sense another novel lurking in this generation of Charltons.

We have no idea if Uncle Henry and Robert Forster were ever called upon to rebuke or admonish John (1746) and Aaron (1723) over how they were running the farm and treating the rest of the family, however, they certainly were thrown off the farm.  According to the land tax documents the two brothers shared the lease of the farm for several years before John Charlton (1746) became the only farmer at North Carter Moor.